A Week of Adventure at Quebec’s Saguenay Fjord 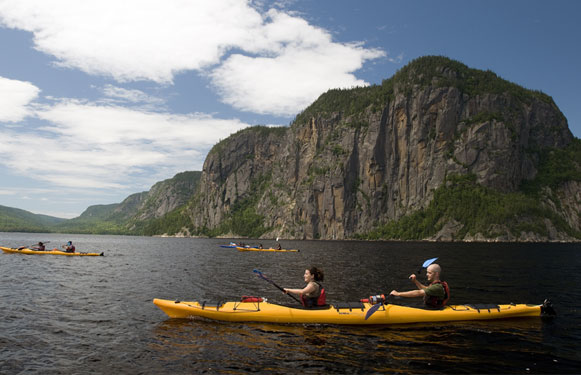 On my last trip to the province of Quebec, I was fortunate to make it to Baie-Saint-Paul in the Charlevoix region, just north of Quebec City along the St. Lawrence Seaway. Charlevoix has become a foodie destination, cherished by residents of Montreal and Quebec City for its cheeses, breads, fresh salmon, microbrews, and local produce. Next week, I’ll be continuing my journey up the St. Lawrence to the 64-mile long Saguenay Fjord, one of the longest and southernmost fjords in the world. Flanked by walls of ash colored rock that rise some 1,150 feet and forests of balsams and yellow birch, it is also one of the most accessible places on the planet to see beluga whales. For quite some time, Saguenay has been on my wish list as I yearned to kayak the fjord, bike a section of the 256-kilometer “Véloroute des Bleuets” or Blueberry Trail cycling path around Lac-Saint-Jean, raft the Metabetchouan River, and hike high above the waters at Parc national du Fjord-du-Saguenay. The perfect Quebec adventure! As an added bonus, I’m headed back to Charlevoix to bike around Isle-aux-Coudres, an island, smack dab in the center of the St. Lawrence River, and to sample the French dining at several bistros that are known throughout Quebec. Please follow along next week as I blog, tweet @ActiveTravels, share photos on Facebook and Instagram, and videos on YouTube. Have a great weekend!