A Wealth of Winter Activity at Vermont’s Grafton Inn 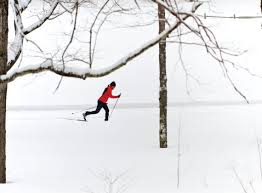 The same deluge of snow that hit Boston this winter, now topping 100 inches thanks to Tuesday night’s dusting, has also arrived at Vermont’s doorstep. Grafton Inn, one of my favorite properties in the state, recently reported that they received over 4 feet of snow in the past 3 weeks. Down the road, the Grafton Ponds Outdoor Center is offering 5 kilometers of groomed trails; Wine & Cheese Snowshoe Hikes on Saturday afternoons; dogsled rides on Wednesdays, Fridays, and Saturdays; tubing on their 600-foot hill; and the use of 2 fat bikes for hitting the trails. On property, the Phelps Barn features live music every Saturday night.
Never been to Grafton? Amble along Main Street past the Country Store, where I once spotted a sign posted outside asking if anyone’s seen a missing horse, and you swear you just stepped into a Currier and Ives painting. To the right is the red brick town hall, circa 1816, now home to the post office. Further up the road, past the white clapboard houses spewing smoke from their chimneys is the requisite white steeple. Across the street is the Old Tavern, opened in 1801, and once the stagecoach stop on the ride from Boston to Montreal. Ulysses S. Grant spent a night here while campaigning for his presidency and Rudyard Kipling liked the locale so much he honeymooned at the hotel in 1892. For more information on Grafton, see the story I wrote for Preservation Magazine.