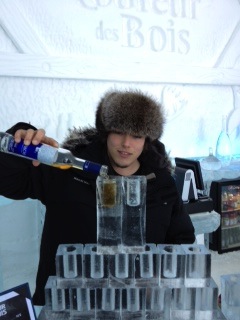 On my last day in Quebec, I took a tour of the only ice hotel in North America. Now in its 13th incarnation, the Hotel de Glace features 44 rooms and suites, a chapel that hosts around 20 weddings each winter, and a bar with incredible acoustics that was blasting a Led Zeppelin tune when I strolled in. It took more than 50 people some 4 to 6 weeks to build the structure, which opened on January 5 and will close on March 24th. Rooms are unheated. You warm up in an outdoor Jacuzzi and then go straight under the blankets for the night. I blew off that option, choosing instead to have a drink of vodka and cider served in an ice flute. Then I took a taxi back to the warm confines of my Hilton room.