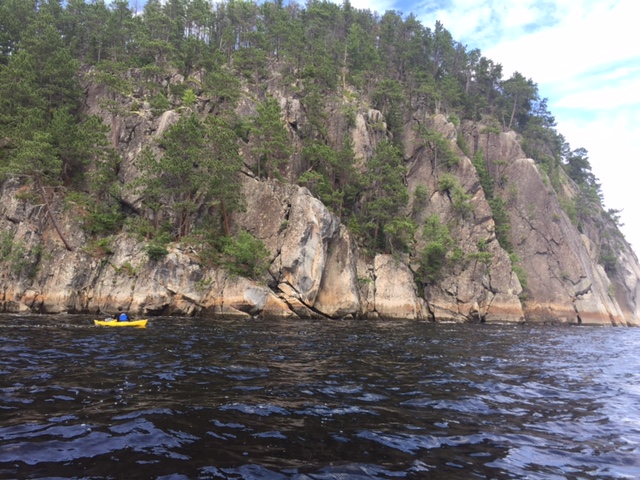 The first you thing you wonder when entering a sea kayak on Saguenay Fjord is where are all the boats? No motorboats, sailboats, jet skies, nothing. Our guide, Jean, tells us there are few places to dock along the 100-kilometer shoreline and even less places to find gas. The second thing you notice is that the water is the color of black ink, perhaps because it reaches a depth of some 900 meters in the middle. We were 80 kilometers down the fjord, only 20 kilometers from the mouth at the St. Lawrence River. This is a prime spot for spotting beluga whales since the federally preserved waters of Baie-Sainte-Marguerite, where belugas mate, were directly across the 2 kilometer channel from us. We paddled along the jagged shoreline lined with cliffs and oversized boulders and topped by pines that remarkably still stand after the harsh winters here. We spotted herons and cormorants but Jean tells us that the rugged shoreline is also a favorite of peregrine falcons.

Then we crossed the channel as the tide rolled out and waited patiently. “Just listen,” said Jean “and you might hear the belugas breathing.” In the distance, we spotted a patch of white break the surface. Then we spotted it again. Jean has had curious belugas come directly to his kayak to peer up at him, but we weren’t so fortunate today. Nonetheless, the weather was perfect, under sunny skies with a slight breeze. It was wonderful to finally be paddling in the Saguenay Fjord, one of the southernmost fjords on the planet, something that has been on my wish list for quite some time.
In the morning, we took a 2-hour hike on the De la Statue trail at Parc National du Fjord-du-Saguenay. We spotted several massive glacial erratics before climbing atop the cliff face. Spectacular vistas of the fjord were around every bend. Whether you hike or paddle the Saguenay Fjord, it’s hard not to be impressed by the quiet beauty.