A Serene Two-Day Stop in Granada 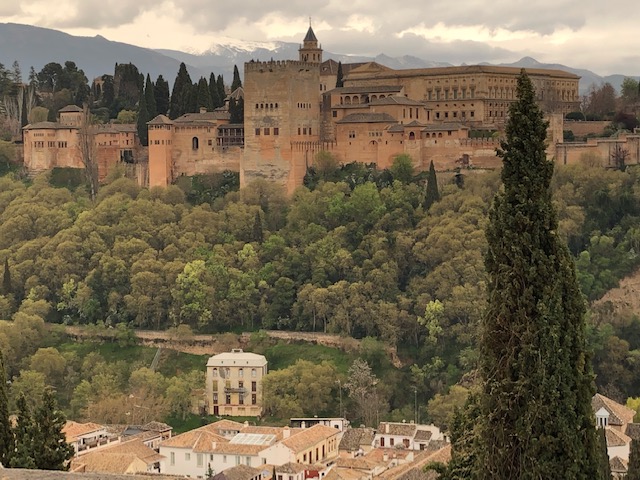 After an hour flight from Barcelona, we arrived in the peaceful mountainside city of Granada. We dropped our bags off at Hotel Palacio de Santa Paula, a Marriott Autograph Collection property. Nondescript from the outside, once we entered our superior room with a towering wooden ribbed ceiling and peered out onto the courtyard of this former 16th-century convent, you realize its charm. Breakfast was served in a spacious sunny room, and we also took advantage of the hamam, the resort’s steam room. The hotel is located in a great location for seeing Granada. We strolled the Romantic Road, Carrera del Darro, a narrow cobblestone street alongside the river, lined with tapas bars, boutique shops, and acoustic guitarists. Then we climbed the hillside past the blooming wisteria into the upscale neighborhood of Albaicín, where we had cervezas at El Huerto de Juan Ranas overlooking the buildings of the Alhambra and the snowcapped peaks in the distance. Such a magical spot that we returned to this outdoor patio the next day to watch the sunset.

The following morning we took a 3-hour tour of the Alhambra with Antonio, a guide that works with one of our preferred tour operators in Spain, Madrid and Beyond. Not only did Antonio grow up playing at the Alhambra when there were few visitors, he has led more 1200 private tours of this magnificent Moorish palace the past 15 years. He knew every nook and cranny of the buildings, including graffiti from a 16th-century Friar found behind a column, to translating every Arabic saying. And, wow, is there a lot of Islamic calligraphy on the walls along with the famous symmetric tiles, the Moorish arches, and fascinating ceilings that looks like bird’s nests from a distance. Add gardens in early spring bloom with irises, pools of water reflecting the arches and you have a dazzling aesthetic well worth the effort to get here. We soaked up all the history, then soaked up the octopus and fried calamari with fresh bread at Los Diamantes at the bottom of the hill. Perfect!