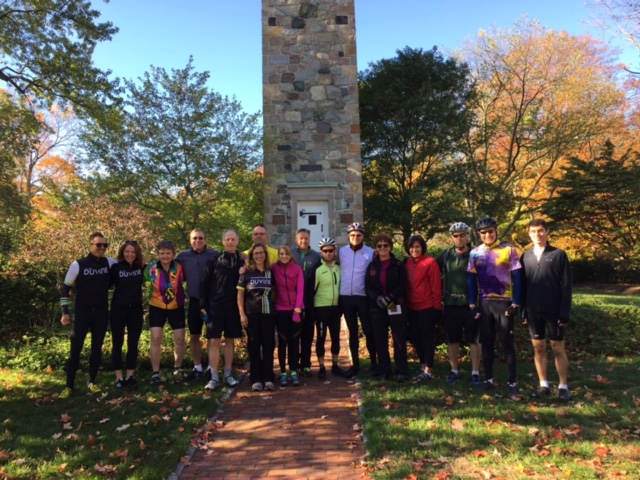 Saturday morning was a bit nippy when we met Andy Levine, founder of DuVine Cycling, along with the marketing department of Deena Giancotti and Gwen Kidera at the clock tower in Wellesley Hills. A table was laden with fresh croissants and coffee from a South End bakery, along with printouts of the 30-mile route Andy had designed for a dozen members of ActiveTravels. We soon warmed up on the hills out of Wellesley into Weston under sunny skies. Andy was zipping back and forth between the faster riders in the front and slower riders to make sure we didn’t get lost. Soon he was called into action when one member of the group had a flat. The foliage was abundant as we cruised by DeCordova Museum in Lincoln and turned left on Baker Bridge Road past the minimalist Gropius House. At the edge of a vast field, tall maples were ablaze in crimson and orange colors. We turned right past Walden Pond and stopped for a snack at the Old Manse in Concord, best known as the house where Ralph Waldo Emerson wrote the book, “Nature.” We were treated to the history of the house, where Hawthorne also lived, by a docent who worked there as we dined on another spread complements of DuVine that consisted of shrimp, an assortment of local cheeses, freshly made blueberry pie and other goodies. Then we made the return trip back, invigorated by the route, scenery, and conversation.
Lisa and I want to thank Andy, Deena, and Gwen for throwing this together for our clientele, a small taste of what DuVine does on their trips to Tuscany, Bordeaux, Napa, and many other locales. Celebrating their 20th anniversary in 2016, they continue to be one of the best in the business. Just ask the father and son we sent to the French Alps this summer who did stages of the Tour de France before watching the best bikers in the world cycle the exact same route. An exhilarating vacation they won’t soon forget.