A Perfect Day in Lausanne 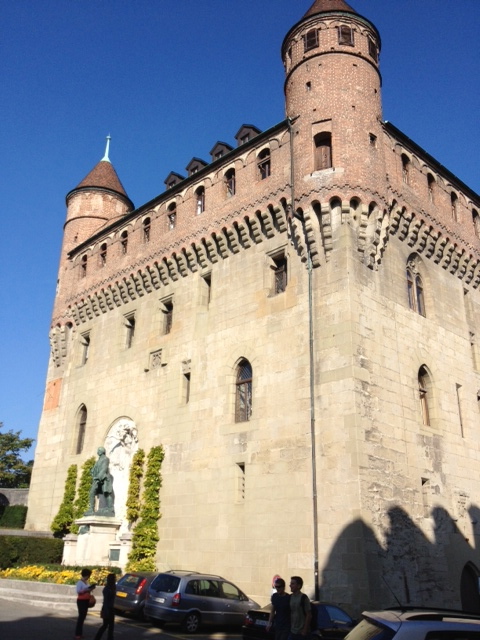 From the shores of Lake Geneva, or Lac Léman as the Swiss call it, to the forest and duck pond of Lac de Sauvabelin, the city of Lausanne climbs an impressive 800 feet. You climb uphill or downhill on an Escher-like maze of stairwells, narrow cobblestone streets, bridges, even elevators and escalators. Last night, I took an elevator close to my hotel, the Lausanne Palace, down to the former warehouse district of Flon, now a Tribeca-like neighborhood of hip restaurants like Le Nomade and popular dance clubs like Mars. It’s quite strange to take an elevator down to another neighborhood, but Lausanne is full of surprises, from the massive Gothic cathedral consecrated in 1275 to Jean Dubuffet’s fascinating Art Brut collection, created for the most part by people who are ingenious or simply insane (I’ll delve into this further tomorrow).

The next day we started with a tower climb at Lac de Sauvabelin for magnificent views of the lake, snow-capped peaks of the Alps, and the Vallée de Joux, known for its communities of watchmakers. Then we walked downhill past century-old beech trees on the grounds of Fondation de l’Hermitage. Soon we were in the oldest part of the city, staring up in awe at the 15th-century Château Saint-Maire and the 13th-centutry Lausanne Cathedral. Definitely enter the cathedral to see the stained windows, including the Rose, where more than half the glass is original. Under a bridge in the charming Escaliers du Marché neighborhood, we found Le Barbare, known for its pudding-like hot chocolate.
Saturday is the best day to visit Lausanne in the summer and fall, because its home to a thriving public market. We made it to the bustling center of town, packed with locals on a warm day picking at bins that overflowed with ripe tomatoes, plums, sunflowers, and a slew of other merchandise. One section was devoted to local butchers and cheesemakers. Another street, we tried chocolate truffles and a delectable wild mushroom dip. Near the market, we had lunch at Café du Grütli to sample a Swiss specialty this time of year, saucisse aux choux, sausage marinated with cabbage. Then we entered Globus, Lausanne’s version of Harrods, to purchase a raclette set for our son. Our last stop was Blondel, a beloved chocolate shop in town, where we purchased more souvenirs for the family. Geneva, a 45-minute train ride away might be the better-known city on Lake Geneva, but Lausanne easily entices.

2 comments on “A Perfect Day in Lausanne”