A Memorable Summer Day in Toronto 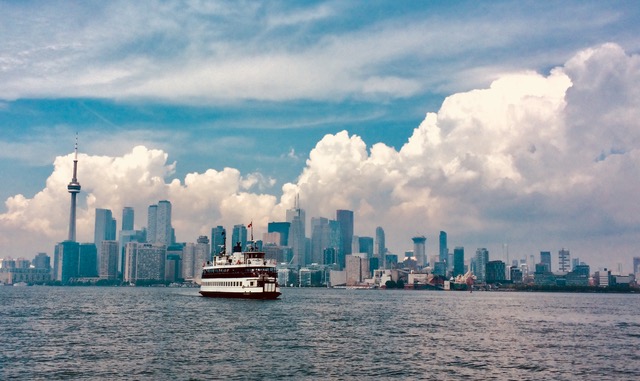 When my husband Josh left for two weeks in the Middle East (Israel, Jordan, Dubai, Sharjah, and Abu Dhabi), my Massachusetts-based friend Tamara came to visit. What fun we had! On a sunny Monday in late July, I enjoyed three new Toronto experiences. I walk frequently on the trails in the ravine by the Evergreen Brickworks and am always impressed by Toronto’s re-use of historical industrial buildings for public purpose. In the 1880s, at this site, a brick factory was built which didn’t close until 1984. Now the Brickworks consists of 16 heritage buildings and an adjacent public park that includes wetlands, hiking trails, and wildflower meadows. It’s one of my favorite places to take visitors, an oasis in the middle of the city – complete with a view of the CN Tower from atop a trail – and is also home to food truck festivals, children’s camps, artisan fairs, Farmers Markets, a bike rental shop, a cafe, and Canada’s first large-scale community environmental centre. What was new to me on Monday was entering the Young Welcome Centre and understanding that everything about the Brickworks is designed to be a global showcase for green urban design. Two large heritage artifacts flank the sides of the Welcome Centre: a brick press and the Foreman’s shed. It was very interesting to learn more, after working up a sweat at the former site of clay extraction for bricks.
Later that day, Tamara and I took a ferry out to the Toronto Islands in Lake Ontario. There are 3 boat routes–one to Ward’s Island (which we did), one to Centre Island (where families go, with a small amusement park, plus bike/canoe/kayak rentals), and one to Hanlan’s Point (gasp–a clothing optional beach). Boats leave from the Jack Layton Ferry Terminal at the foot of Bay Street and Queen’s Quay, and there are actually 15 islands inter-connected by pathways and bridges. You can walk or bike from one end to the other (approximately 5 km from Ward’s Island to Hanlan’s Point). We enjoyed exploring, eating lunch at the Island Cafe, hitting the beach, and swimming. Two-plus years in Toronto, and I hadn’t lazily floated in my bathing suit in Lake Ontario! Check that off. I later fantasized about living on one of the islands, but there is a 20-25 year waiting list for a cottage.
Lastly, at night, Tamara and I headed to Casa Loma, another first for me. Sir Henry Pellat commissioned his tremendous castle or "House on the Hill" in 1911. Sitting 460 feet above sea level, it’s quite a place: 98 rooms, 30 bathrooms, 25 fireplaces, 3 bowling alleys, a 50-metre (160-foot) shooting gallery, a temperature-controlled wine cellar capable of holding 1,700 bottles, an unfinished 18-metre (60-foot) long indoor swimming pool, and a 243-metre (800-foot) tunnel constructed 6 metres (20 feet) underground to the stables across the street. Sadly, financial troubles meant the Pellatts moved to their farm in 1924, and the City of Toronto is currently the sole owner of the site. On Monday evenings during the summer, Casa Loma hosts an award-winning singer and his seven-piece band for "Soul in the City." You get amazing views of the city, and access to the castle and beautiful gardens, while eating, drinking, and enjoying the music. By the second set, Tamara and I were able to get up close to the stage and dance until our feet hurt. "We’re gonna have a good time tonight; Let’s celebrate, it’s all right."
If a trip to Toronto interests you, let ActiveTravels help!