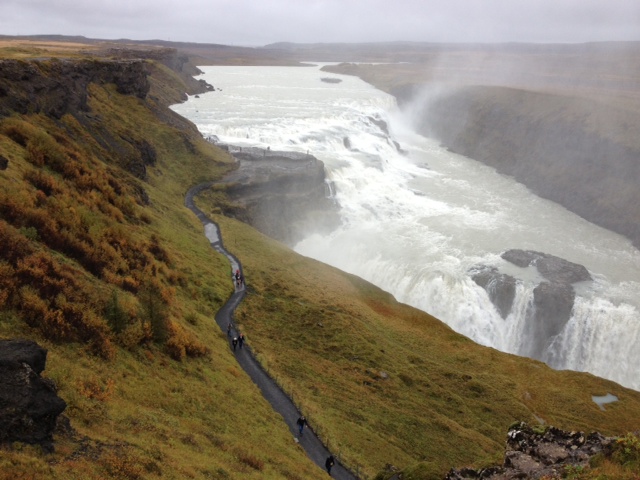 One-day bus tours aren’t my cup of tea. Especially when the guide has memorized an encyclopedia on Iceland and is blurting out everything she knows about the country into a microphone at the front of the bus. There was no pause, just a barrage of factoids that had nothing to do with the landscape we were looking at. At one point, I couldn’t stop laughing hysterically with a friend because this guide could not shut up and give it a rest. We decided to return home and create a “Boston Bullshit Tour” where we would hire stand-up comedians to adlib about Boston’s history, basically saying anything that comes to mind.

Yet, it’s hard not to include the Golden Circle Tour into my list of favorite travel days because the scenery we saw that day was so striking. First stop was Thingvellir (Þingvellir) National Park, a UNESCO World Heritage Site where the tectonic plates of Europe and North America meet. You walk on a narrow trail dwarfed by the rocky walls. Next up was the surging waters of the Gulfoss Waterfalls, cascading down the tiers of rock. We took a short hike to the lip of waterfalls, sprayed by the cool water of this massive falls. Last stop was Geysir, Iceland’s version of Yellowstone where hot pools churn and bubble and the Strokkur geyser erupts every 4 to 5 minutes.
When told that we would be making one last stop on our Golden Circle route, at a greenhouse, most of the people on our tour scoffed at the idea, simply wanting to get back to our hotel in Reykjavik. It sounded like some hokey add-on, like visiting a gift shop owned by the bus driver’s brother. We were pleasantly surprised to find that Friðheimar is no ordinary greenhouse but a massive year-round tomato and cucumber growing operation that yields close to a ton a day of crop thanks to the geothermal energy. I met the owner, Knútur Rafn Ármann, popped a tomato in my mouth (delicious), and then was treated to a sublime cup of tomato soup garnished with cucumber salsa and paired with fresh baked bread. It was probably the best dish I had in the country.