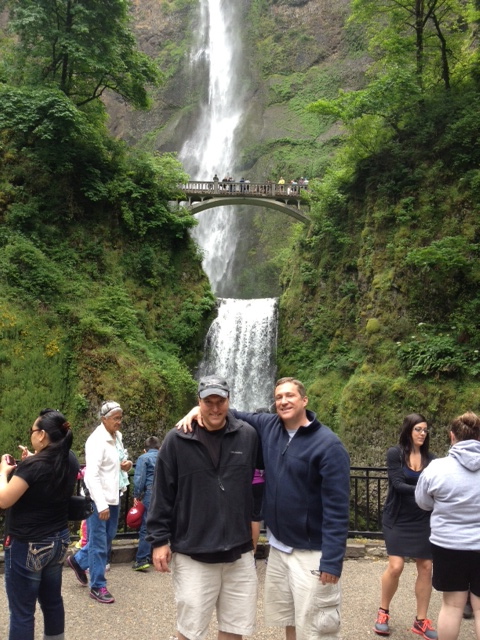 I was recently snorkeling with a trucker in the Keys. When he heard I was a travel writer, he asked what my favorite state was. “Based on cruising?” I asked. He nodded. “Oregon,” I said. “Mine too,” he answered, and this is a guy who’s spent his entire life driving back and forth across the States. I’ve been fortunate to go on two phenomenal driving trips of Oregon with my brother, Jim. We first spent a week driving along the Oregon coast, dreaming of buying a second home in Yachats. This June, we returned to drive the interior. To be honest, every one of those days on that weeklong trip could easily make my Top 5 list of the year, from touring Hood River’s “Fruit Loop” with our friend Kirby Neumann-Rea to rafting the Imperial River to hiking along the rim of Crater Lake to biking around the campus of the University of Oregon. All was bliss.

Yet, it’s hard to top drinking the latest batch of wine with one of your favorite winemakers, Steve Doerner at Cristom Vineyards, and then have dinner that evening in Portland at Vitaly Paley’s latest restaurant, Imperial. Jim and I both purchased a case of wine at Cristom, including sweet-talking Doerner to include six bottles of our beloved “Jessie Vineyard,” the last of which we just drank over New Year’s. Then we hightailed it from Salem to Portland for dinner at the James Beard-award winning chef’s new space on the ground floor of Hotel Lucia. We started with a simple plate of just-out-of-the-ocean Kumamoto and Tillamook Bay oysters, dipped in horseradish for spice. Perfection. Stan’s Charcuterie Plate, a sampling of pate, liver, and sausages, would make a Francophile weep with joy. In fact, Jim, just back from the Cannes Film Festival, said it was better than any of the pates he had in France.
Oregon, we took far too long to return between trips. Jim and I won’t make that mistake again.