5 Adventures on a Shoestring, Mountain Biking Across the Malay Peninsula 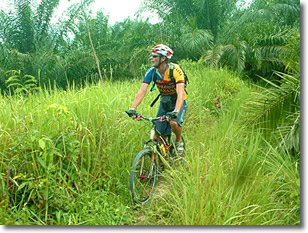 It took more than two years to design and build a 205-mile mountain biking trek that crosses Thailand’s Malay Peninsula. But now that it’s complete, fat wheelers are calling it some of the best riding in Southeast Asia. Starting in Surat Thani, you bike through jungle, rubber and palm plantations, and small villages from the Andaman Sea to the Gulf of Thailand. Leaving the masses behind, you’ll get a chance to see the real Thailand on a weeklong trek offered by Thai Cycle. There’s also a shorter 5-day ride that gets you halfway across, zipping up and down numerous singletracks along the way. Cost for the 7-day trip starts at $817 per person, including food, guides, lodging, camping, and bikes. Don’t forget your Camelbak.